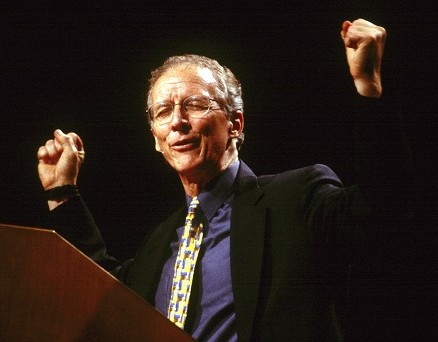 As soon as he would get up in front of people, his knees would shake, he would sweat, he would stumble over his words and forget what he was going to say.He knew he needed help big time after a recent employee briefing when he simply couldn’t go on and had to have someone take over for him. This was hardly the image he wanted to portray as a confident leader!

During a private coaching session in my office, I asked him to stand up in front of me and just tell me anything. As he started, he stuttered and spoke hesitantly, looked up at the ceiling and was “wiping” his palms together in front of his torso, swiping first one hand and then the other in an alternating rhythm. He was nervous and looked it. He definitely needed to build confidence.

Right away, I asked him to try something different…

I asked him to find a comfortable, stationary position for his hands. I didn’t tell him where to put them. He experimented with a few possibilities and then settled on resting his hands, one over the other, pointed downward below his waist.

Taking that cue, I asked him to keep his hands there as his “home base” position and go back to what he was saying. What a difference! He calmed down visibly and was able to look right at me and tell me his story. No stuttering, no hesitation!  He looked quite professional settled into that position.

As he went on, I noticed that his fingers spontaneously started to move ever so slightly, expressing what he was saying. He wasn’t even aware of it.

Building on that cue, I suggested that if his hands wanted to move, to allow them to. Do not make them move, allow them to, only if they wanted to. (How many times are we taught “use our hands” and make gestures with what we are saying, only to feel awkward and self-conscious doing it?)

Soon he was allowing his hands to gesture naturally, still speaking smoothly and getting even more into the story he was telling me. If there was the least hint of hesitation, he returned his hands to their base position and immediately settled down and went on.

So I took it one more level. So far he had only been addressing me. So I asked him to imagine there were people sitting in the other 8 or so places around the room, and imagine addressing those people, too. After returning to his base position for a bit, he was able to let go and relax into that as well!

One more thing: I asked him to imagine people in the audience that he liked. Preferably people who might be in a real audience, but at least people he liked. That made him smile a little and he became even more at ease.

He found he had much more confidence!

Each of these steps helped him build his confidence and relax into his message. He ended up giving me (and his invisible audience) a rundown on the financial goals of his company, a brief history lesson and an extemporaneous speech, all quite smoothly and comfortably and with confidence.

(We did some Energy Psychology routines along the way, to reduce any excess adrenaline that began to build, and at the end, to let this new comfortable self-concept and approach to speaking sink in and be available to him in the real world.)

When he left he felt positive and eager to speak to his employees and to a professional organization he belongs to.

For a recap of the techniques in this session that will help you build confidence and calm your fears, go here.

Send me a message or ask a question: